Vegas in the Springtime 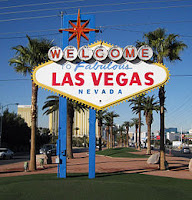 Yesterday afternoon, after a very bumpy flight, the kind that gives even a seasoned traveler like me clammy hands and a few mild heart palpitations, I landed in that desert oasis known to many as Sin City.  Las Vegas.  It occurred to me, as I made my way through the airport towards the interminably long taxi line, amidst the ka-ching sound of slot machines, sandwiched between the two best friends I will spend today working and playing with, that this was the third year in a row that I had made an April trip to the strip and my second one here in less than six months, not to mention my sixth in three years.  That’s a lot of Vegas time for someone who no longer lives in close proximity and doesn’t have a gambling addiction.  In my defense, and lest you think me an insufferable party animal, no would be a good time to note that half the trips were work related, and as for the other three, one involved a half-marathon, one was to see family and one had the sole purpose for visiting was a baby shower.  Yes, a baby shower in Las Vegas.  But I’ll get to that later.

My first April here was in 2010.  Any good rockabilly fan should know about the Viva Las Vegas weekend event that takes over the Orleans Hotel every spring.  A weekend of cool bands, slick cars and the hippest cats this side of the Mississippi.  So now might be a good time to mention I sometimes moonlight as a 19040’s pin-up doll in a performance/dance group called The Diamond Bettys.  Think USO style-show, with dancing, classic 40’s and 50’s tunes, a little singing and a host who is hopefully both funny and charming.  If I’m not, don’t tell me.  We had been invited to perform two mainstage shows during the weekend-long event.  That April I was still fairly fresh off a difficult breakup and still reeling from the blow.  And the ex in question was in the process of moving to Las Vegas.  This was now his city and I was a nervous outsider.  By the end of the weekend, after a stint on the news, two mainstage shows with rousing audience approval, some quality time with a great group of girls and by the end of the weekend, I owned the town.  Well, at a slightly sketchy stretch of it along Tropicana.

A couple months later, I came back, this time for an old friend’s baby shower.  Jennifer moved here from LA years ago and is one of my oldest and dearest friends from my life in the City of Angels.  She was a first-time mom, single and with twins on the way.  It wasn’t even a question of if I would come.  I packed my dog in the car and made the road trip to spend the weekend with her.  I did see the ex on that trip, unexpectedly, coming at a time when I still thought we had a chance of something down the line.  It was the last time I would see him, and shortly after, we would fall out of communication, for many reasons that make me sad, because in a quiet moment, when I think back on that part of my life, I can remember the good times.

The following fall, with my life and car headed in new directions, my mom and I came through on a road trip.  I was taking said car, and my dog on a month-long trip to Dallas.  A chance to see how I felt about the town I hadn’t lived in for 18 years.  We waylaid in Vegas for a night.  My cousin Kyle had starting his contract to star in Love, the resident Cirque du Soleil spectacle about the Beatles.  We wanted to catch him in the act, because how often does a relative star in a Cirque Show as the spirit of John Lennon.  I’m guessing not often.  Let me just interject with a note on how much I love Vegas shows, Cirque shows in particular.  A dream vacation to Vegas for me involves meals in great restaurants, some time by the pool and a show every night.  But this was even better than that.  My own family member, owning that big, brilliant stage.  He smiled at me once during the show.  Well, almost smiled, he’s not aloud to move his mouth more then a few inches, per the artistic director’s interpretation of the character.  But that tiny half grin, made me feel like a star.  And like family.

Last April, the Betty’s came back for Viva Las Vegas, round two.  Which came just a few months after I’d left LA for the big move back to my hometown.  This time we were invited to model for the big fashion show, walk the runway for Bettie Page Clothing.  That trip was a chance to reconnect with my girls on the West Coast.  Plus I got to see Jennifer, and Kyle.  The trip was a good gut check on my world.  Did I make the right decisions in the past?  Maybe, maybe not, but I felt at peace.  In December, I was here again.  And last night as we walked to an amazing Indian restaurant to eat our weight in naan and tikka masala, I marveled at the expanse of Las Vegas Blvd, a street I had last seen for 13.1 miles on foot, in the dark of night.  But you can read more about that here.

Today, I’ll spend most of the day somewhere at the Renaissance Hotel, or maybe the Convention Center.  Something called the NAB.  I guess with as much of a tech geek I am, I should know something about it but I honestly have no idea.  Renee, Alika and I will be wandering around somewhere, handing out flyers.  It’s not a Bettys gig this year, it’s just the three of us.  A new fiancée and her two bridesmaids, who spent the flights here gabbing about which wedding gowns will look best on the lovely Renee.  We’ll be gone by tomorrow morning.  It wasn’t that long ago that I was here last, for my first half-marathon.  And landing here again today got me thinking about what Vegas is to me.  For most people it’s a place to party, a place to escape, to get away from the real world.  I haven’t been to Vegas purely for a vacation in almost three years.  I’m sure I’ll do it again, in fact, I kind of look forward to it, just to see what it might bring, which will hopefully be good food, great shows and some time by the pool.  But for now, for me, Vegas has become something altogether different.  It’s a home.  To an old friend and her new twin boys.  To an ex-love.  To family.  It’s a challenge.  A place to conquer, miles to cover.  Somewhere to find a little bit of success just when you need it.  It’s a job, albeit a fun one.  That I get to do with the best friends a girl could have.  And so each visit, without gambling a penny, I get to go home a little richer than when I arrived.
Posted by Karen Soltero at 11:02 AM