Begin at the End 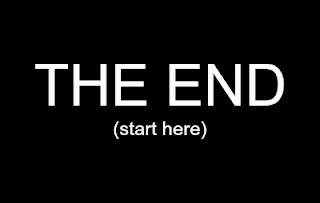 On Sunday night I was sitting in the lobby bar at a Las Vegas hotel, catching up with an old friend I hadn't seen in we couldn't figure out how long, but at least 7 or so years.  Some people go to Vegas to gamble, I go to Vegas to see old friends, because that's where a surprising number of them live.  Towards the end of our conversation he said something I can't remember exactly, I was two merlots deep at that point, but the gist of it was that you should always live the life you want to be in, not the one you imagine, or hope to arrive at somewhere a little further down the line.  The specifics had to do with whether or not to get a new car, in light of other uncertainties in life, which sounds really banal.  But over the last couple days since I've been back home, it's been sitting in the back of my head.  Today it started percolating and a conversation from lunch yesterday brought me back to this blog, to a realization that it has been two years since I've put in an entry.  Which is even more telling.  So I find myself back here, at the end of the month, on the cusp of the ending month of the year.

Less than two months ago I was invited into a large conference room and told my job was ending.  All of our jobs were ending - an entire office closing down.  For the decision-makers, it was I imagine, a drawn out, contemplative process, but for us, the ones in the trenches, it happened in an instant.  One day we had jobs, an office, a goal, heck it was sales, lots of goals.  And then we just didn't.  Some of us are trickling out, one by one until the end of the year, but for others, it was over in the course of a day.  I'm angry, sad and whatever the rest of the Elisabeth Kubler-Ross' cycle of grief and loss includes (maybe not the denial - it's hard to deny a half empty office).  But here's the thing.  I'm not that sad.  I'm still that angry.  I have no idea what happens next, which scares the stuffing out of me, but I know one thing.  I was definitely not living the life I wanted to be in, and it sure as hell wasn't the one I imagined.  It was a world where I didn't write, because I was too tired to find words, too terrified to confront a blank page.  Confidence in my ability to create falling to the wayside, so much that this feels rusty, awkward.  But that's okay, it's a start.

Less than two weeks ago, something far worse than losing a job I no longer wanted happened.  I opened up Facebook to find that the life of an old and very dear friend had ended.  It happened too suddenly, too soon.  I read and re-read the last text he sent to me just the week before, expressing love and friendship, sadness and hope.  It took a few days for it to edge past the all too familiar shock, the numbness.  And then, with those stages.  Suddenly coming all at once.  Sitting in the middle of a Dallas Mavericks game two days after Brandy died, I burst into tears, which was only not that weird because our team was being slaughtered by the Clippers so one could take me for a really emotional fan.  But I was crying because Brandy loved basketball.  Sports in general really, but basketball, football and surfing the most.  Since we first met in college he always tried to incite sports rivalries with me.  He was a devoted 49ers fan, trying for years to rile me up when they beat the Cowboys.  I could give a shit about football, especially given the quality of my hometown team for most of the 22 years I've known Brandy, so it didn't work, but it never stopped him from trying.

It was theater though, that brought us together.  A common major, we met over the headsets during a UCLA production where he was the stage manager, and as a lighting class requirement, I was doing my best impression of a light board operator.  Sparks flew to the point that we were told to stop hitting on each other over the airwaves, where the rest of the set techs and stage hands could hear everything.  It kindled to a brief romance and then quickly settled into a deep and lengthy friendship that would stick over the next twenty some-odd years, despite often living in different cities and then time zones.  He called me once, in senior year, at around three in the morning.

That was when we had a long discussion about how we should be friends.  I remember it now, though until just a day or two ago, I couldn't have told you how and when that conversation happened.  So at the end, I'm finding myself remember so much about the beginning of that friendship.

Brandy in your life was like a good glass of his namesake sliding down the back of your throat.  Fiery, unpredictable, capable of making you do things you wouldn't normally do.  That wasn't a bad thing.  But life changed over the years, from those first heady days when as theater-major college grads, we imagined a world of creativity and artistic promise ahead of us.  And we were living the life we wanted to live.  It's easy on someone else's nickel.  Computers would be come his livelihood.  Dreams taking a backseat to struggles and love and real life.  I think that's part of what took him, in the end, not living the life he imagined.  It took him slowly and I saw his life change away from the things he wanted it to be.  His final text echoed that desire, to be back where his dreams lived.  Surfing with handicap kids in San Diego.  Creating something magical.

On Saturday night, my girlfriend and I went to see a musical tribute to Baz Lurhman's films, courtesy of a quick trip to the half-price tickets booth.  It was a small theater and the singing and dancing from Moulin Rouge, Romeo and Juliet and The Great Gatsby were all around us, sometimes so close I could see the spit fly from the actors mouths and hear the sound of their voices coming from deep inside their chests, not from the expansive and expensive audio system. And while I was captivated by the tremendous voices, I was more entranced by their energy.  I longed to jump up and run through the aisles with them.  I don't sing, except in the shower and the car, but I wanted to belt out every tune, throw myself across the stage.  It was almost an ache to sit still on the banquette.  I know from my cousin, who spent five years performing in a Vegas show, that it's a lot like groundhog day.  The glamour wears off when you do the same show twice a night for years.  But for me, everything was in that moment.  My own memories of being on stage, of feeling that kind of energy, that kind of passion.  Of not being so tired.  Because that's what I am now, and it sucks.  That's what Brandy was too, I think.  And his body said no more, or he said no more, it doesn't really matter now.

One doesn't normally go to Vegas for a heavy dose of introspection and clarity.  The McCarran airport on a Sunday is full of hazy people who are wearing clothes they don't recognize and can't figure out which hotel room was the one that actually belonged to them, let alone, why they have a hundred dollar bill tucked into their shoe.  But thanks to Miller, and a discussion about cars, and to Baz Lurhman, who is a weird dude, but I love his films, and to Brandy, who came along with me on the trip in the form of new memories every day, I did come back with an epiphany instead of a hangover.

So here's a little tough love to myself.  In print, in public, where I can't ignore it.  Write shit down.  All the time.  It's going to suck at first, but it'll get better again.  You'll find your words.  Don't get a new car.  Yet.  BUT...live like you can stroll into the dealer tomorrow.  Find a job that doesn't make you want to crawl in a hole when you come home from work.  It's not the hours that are making you tired, it's being in the wrong place doing the wrong thing.  Dance more.  In your living room, at the bar, go back to the Swing Dance Society where partners are easy to find and fun to twirl the room with.  Wear the crazy amazing shoes you bought in Vegas.  Even to the grocery store if need be and eventually, they'll take you the venue they were meant for.  Keep remembering Brandy.  Do him and yourself justice by taking the windy path instead of the straight one.  Be responsible, sure but defiant too, just a little bit, like Brandy on his chair at UCLA graduation, arm raised towards a future, ready to go there.  Remember, thank you Baz, that the most important thing, is to love and be loved, so you know, just go do that. 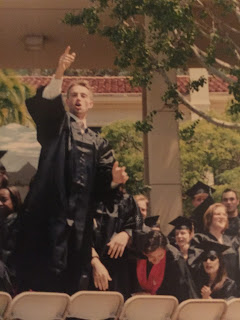 This is in so many ways, the end.  Which is as good a place to begin as any.  Better, even.  Cheers to the dreamers and the artists, who do their work and then still find a way to live in their dream.  Brandy and I salute you and, maybe a little because of him, but mostly on behalf of me, and in the interest in living that life now instead of waiting for the right time for it to happen, I'm coming back to join you.