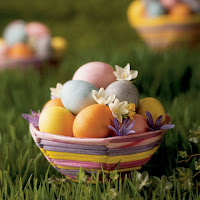 For two years, my sister Wendy and I lived together in a small house in the North Hollywood neighborhood of Los Angeles.  She was finishing up her undergrad at Occidental College and I was going to grad school at Claremont.  As Easter rolled around that first year we lived together, we both found ourselves craving the traditional Easter foods of our youth.  We have always been a family of holiday food traditions.  Christmas eve was grandma’s paella and empanadas, in honor of my grandfather’s Spanish heritage.  Christmas morning, bagels and lox, a nod I suppose, to our some Jewish lineage in our family, and also just because we like it.  Christmas dinner was crown roast of lamb and twice baked potatoes.  But Easter was always one of our favorites, a Honeybaked Ham, as in from the Honeybaked store, scalloped potatoes, which is the definitively the best way to eat them and an old English family recipe for a sweet wine and raisin sauce that gets poured over absolutely everything.  Followed, if you can find the room, by peach cobbler.  An unusual variation on the recipe that somewhat resembles a clafoutis, with puffs of airy cake made with lots of spiced rum surrounding sweet peaches.

Neither of us were particularly religious, Wendy and I both leaned towards a more universal approach to spirituality, understanding and respecting the beliefs and traditions of a number of different religions.  But we also both understood that sometimes, holidays are less about the historical moments they symbolize and more about the way they give us an opportunity to come together, and a chance to share the things we have with those around us who we care about.  Things like love, and peach cobbler.  So we decided to pull together the family recipes, make a trip to the Honeybaked Ham Store.  And then we put the word out to friends – those displaced from families due to college or work.  Those with no connection to their families, those with no connection to the idea of holidays.  There was no formal invitation, just an open door policy.  We called it our “Easter Dinner for Wayward Children.”  We were very clever back then.  We had a full house and a houseful of full tummies.  So we did it again the following year.  Same menu, same policy, same chance to share with friends who didn’t have other plans.

After Wendy was killed, I took a little hiatus from my regularly scheduled life.  But as things began to turn right-side up again, I tried to reconstruct those dinners from my own little rental house in LA.  What’s funny is that I know I had a few of them over the last 11 years and I know people came, but it just wasn’t quite the same, and to be honest, though it makes me sad to say it, because I know that friends I love dearly came, I don’t even really remember them.

About a year ago I moved back to Dallas.  We didn’t do Easter dinner last year, I was still in the midst of the adjustment process from moving across the country.  But last week, I suddenly got the craving.  The one for ham and scalloped potatoes with wine sauce all over everything.  The one for a holiday shared with friends.  And the one for making Easter dinner with my sister.  Two of my best friends moved back to Texas within the same six months that I did.  So I put out an invite to them, and to another friend, one who went to school with my sister and has become a part of our family in lieu of a great relationship with her own.

Saturday afternoon, I made wine sauce and peach cobbler in the kitchen I grew up cooking in.  One I spent countless hours in with my sister.  She was with me, making sure the flavors were right in the sauce.  Definitely making sure I had a heavy hand with the rum in the cobbler.  Sharing in my enjoyment during what she thought was the best part of the cobbler making process, when you got to squish the peaches in your hands and let them fall into the batter.  Sunday, I scalloped the potatoes, cutting my finger twice while peeling them and wishing I could hand that job off to Wendy.  And Sunday evening, with my dad out of town, we sat around my family’s dining room table.  Renee’s new fiancé was with her, and Alika’s boyfriend came too.  And Tash, my mom and me.  Wendy was there too, in the house, in the meal and in our memories.  Our Easter Dinner for Wayward Children was complete.  And then I realized that we were no longer wayward.  And as we laughed and ate and drank, and drank some more, I knew that we had all somehow, found our way home.
Posted by Karen Soltero at 11:45 AM