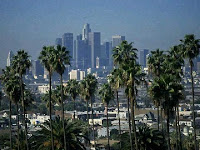 For eighteen and a half years, I had a love affair with Los Angeles.  It started when I was young, just out of high school and headed to college at UCLA.  I was nervous.  This city was different from the one I was used to, bigger, more mature.  LA was sexy, mysterious, maybe even a little dangerous.  I was hooked on the idea of it, what it represented.  A world of promise and opportunity for a naïve eighteen year old with dreams of stardom, fantasies of a Hollywood career.  The first day of college, on my way to my very first class as a theater major, John Lithgow casually jogged by me as I crossed through the heart of campus.  Mine beat a little faster.  I was already mingling with talent.  This was a place where magic could happen.

Over the next few years of college, and the couple of years after that, the honeymoon phase would continue.  With a car and an off-campus apartment, I would begin learn more about my beloved angel.  I would finally drive her windy streets.  I would discover her sandy beaches, her nightlife, her friends - neighboring cities like Santa Barbara and San Diego.  After college I would dive into a colorful approximation of the real world.  Days on television shows, nights on movie sets.  I was only an extra most of the time, or maybe a stand-in, but it didn’t matter.  Everything was a big adventure.  All of my friends were actors.  I was living the life.

Until it couldn’t pay the bills and the necessity of a real job came rushing at me.  Honeymoon phase over.  So I tried to reinvent my relationship with LA.  I moved to the Valley.  I went to grad school.  A new direction was just what we needed to keep things fresh, interesting, moving forward.  I would still be in film and television, but this time I would produce, maybe do a little entertainment marketing.  The angels spread their wings as if to say, “We have so much more to offer.”  My sister came to LA.  I made new friends.

In late fall of 2000, Los Angeles and I had our first real fight.  We almost broke up.  The angels had folded their wings over their closed eyes one night, and when their guard was down, my sister was taken.  I blamed the city, I blamed myself.  I even left for a little while.  But I came back.  I believed that my very survival resided in my ability to succeed in this relationship.  I needed to be in Los Angeles.  I needed to prove to myself that I could be there and be okay.  It was shaky for a while,  the emotional earthquakes deeper than any ground tremor I had ever weathered.  But I needed the familiarity, the place where my sister and I had spent the last two years together.  The streets, the restaurants, the beaches.  As I explored, I discovered, yet again, new places.  I found hiking, and wandered the canyons of the Hollywood Hills, the Santa Monica Mountains.  Sure there was traffic, and smog and crime.  But there was also so much nature, so much beauty.  I remembered why I’d fallen in love in the first place.

But it wouldn’t last.  The traffic, the smog, the high price tag on everything would take its toll.  The gilding would start to wear off.  Slowly at first, years in the making.  Towards the end, it picked up speed.  Good friends left the city for far away places, rent went up and business went down.  The economy crumbled.  I wasn’t happy in the relationship.  I wanted out.

In 2010 I would decide it was over.  It was a slow breakup, a few months of planning and packing and arrangements.  In early 2011, I said my goodbyes and made my way towards a new life in Texas.

I’ve been back several times over the past year.  And when I visit, it’s like seeing an old love.  This past week I spent several days back in the arms of the angels, and after a conversation last night about relationships, I realized that though I no longer live in LA, and the love affair is definitely over, there is something important that remains.  It is the friendship.  For eighteen and a half years, the City of Angels was my best friend.  I knew her streets almost as well as the lines on my own palm.  I knew her moods, sad and rainy in February, gloomy in June, angry with heat in late September.  I knew the things I loved, the hikes in the hills, the great sushi, the beach.  And I knew the things I hated, the traffic, the smog, the cost of gas.  In the end, we weren’t meant to be together.  But when I visit, like I did last week, I can remember the good times and I can celebrate what is still a lovely friendship.  And so I hiked my favorite canyon, took a cardio barre class.  I ate at my favorite restaurants and caught up with the people I love who still live there.

When I left yesterday morning I was ready to go.  I had seen enough of the things that reminded me we didn’t belong together.  But I had also seen the good stuff, the things that make me happy the angels and I are still such good friends.  And as the wheels of the plane touched down on Texas soil and I realized I was home, I also realized that I was looking forward to a return visit sometime soon.
Posted by Karen Soltero at 1:04 PM