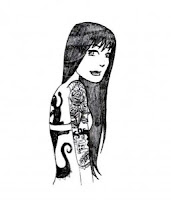 I’m getting a tattoo removed.  The painful, strange and sometimes disgusting process has been going on for about a year.  I thought when I started, I’d be all done by now, but it’s stubborn, and unfortunately made up of colors that are the hardest to remove, which is another note to self.  When people find out, they always ask why I want it off.  Does it have a bad memory, so scarring emotional echo that I’m trying to eradicate?  Nope, it’s kind of the opposite, actually.  It’s a tattoo with pretty good memories.  But it was ugly.  What had started out as a dainty butterfly just below my right big toe had become an amorphous blob, more dung beetle than colorful winged creature.

The little butterfly was my first tattoo.  I was twenty-years-old and on the proverbial verge of adulthood.  At least I thought so.  I wanted to mark the moment, commemorate what I saw as the spreading of my own wings.  I’ll say what you’re thinking.  It was a little cheesy.  I was twenty, and fancied myself poetic.  My little sister and one of my best childhood friends took me to get inked, on a hot summer night in Texas.  Somewhere in Deep Ellum, we found Tattoos by Lurch, though I think the artist’s name was Jeff or something equally banal.  Greg held my hand and my sister snapped photos as the needle staccato’d the simple black outline of a butterfly onto my foot.

I should have kept it that way, but getting tattoos is, as they say, addicting.  Addicting enough that I have four, not so addicting that you can find them on me without me telling you where to look.  I already had another one, a little after my 21st birthday.  A year or so later, my sister was in LA for a visit.  She was eighteen and had decided it was her turn.  I watched the guy fill in three blue raindrops on this inside of her ankle and decided my little butterfly needed some color.  So I proffered up my toe for a consult and returned a few weeks later to get it filled in, which in hindsight was a bad idea.

If I have my way, and the removal process eventually wins its battle over the stubborn and unnecessarily significant amount of ink in my right foot, then both of my first two tattoos will no longer be visible.  The second one is already covered up by one that I love.  It was another one that didn’t evoke any bad memories, failed love affairs or other emotional traumas.  It was just bad.  It was applied to my skin by a man named Shock, in a tattoo parlor on Melrose, and it was not art.  Now that it’s been covered by something beautiful, drawn partly by a friend and partly by a tattoo artist who works in a place that keeps 9-5 hours and requires a pre-session consultation as well as several concept drawings by email, I have learned the difference between what I consider a tattoo artist and a tattoo technician.

It’s interesting to see something that’s been there since I was just shy of my twentieth birthday slowly fade from existence.  I don’t regret those first tattoos, despite the lack of proficiency with which they were emblazoned on my body.  They taught me an important lesson worth applying if you are considering permanent artwork.  And each experience made memories.  I’m not losing those precious moments spent with my sister every time the laser shatters more ink.  If anything, I remember them with more clarity, more detail.  As the Q-Switch has done its job, each session has actually made the tattoo brighter, brought back the old colors and sharpened the details of those memories.  And now, as the ink is slowly starting to fade and the dung beetle reverts to a butterfly and slowly, back to my skin, I know that the memories are not in the ink, but in me.
Posted by Karen Soltero at 9:49 PM