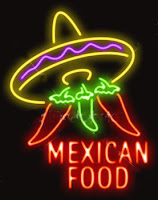 Early last week, my friend Jimmy came to town from LA for a quick visit, not a brilliant measure on his part in terms of timing for good Dallas weather, but I am always happy to have him in my orbit for a little while.  So it was hot out, and we decided to go for a walk at the lake anyway.  As my running partner said to me last night, we were determined to “suck it up and deal.”  And funny enough, we didn’t really notice the heat that much because we were too busy chatting, and debating options for dinner, post walk.  Jimmy had been to Dallas once before, last spring, and we’d done the requisite dining tour of the city – Mexican, steak, barbeque.  So that evening was up for grabs and we tossed out a few ideas, a revisit to Mexican food being one of them.

“Not El Fenix,” I said, because we went there last time.  “But you know, there’s always another Mexican food restaurant.”  Jimmy laughed.  “There is!  You can visit here seventeen times and we could go to a different one every time and still have more on the list.”

“You should write a blog titled that, “ he said.  “There’s always another Mexican food restaurant.  It doesn’t have to be about Mexican food.”

So I started thinking about the greater meaning of that phrase, outside the confines of Texas, or perhaps Mexico, and something kind of hit me.  And for some reason, I thought about my first real best friend.

I met Aron Northington in the first grade.  She was in my homeroom class and she captivated me.  She was tall, with impossibly shiny, long blonde hair.  We couldn’t have been more opposite, visually, until I looked down that first day of class and saw we were wearing the same shoes.  Not a big stretch, because this was a uniform school, so we were also wearing the same outfit, and how many pairs of navy blue kid’s leather Mary Janes are really available at the mall at any given time.  But it was the intro a shy kid like me needed, and it opened the door.  By happy accident our names also rhymed.  From that day on, we were pretty much inseparable.  I even named my first pet, a kitten, after her little brother Ben, on the specific instructions that everyone pronounce it with the same Texas drawl that Aron did, so it sounded something like “Be-yun.”  I know what you’re thinking, but it’s not creepy when you’re seven.  I didn’t dye my hair blonde and drop the K off my name too, I just really dug the way she said that name with the accent that, thanks to two Yankee parents, I did not possess.  We had a good run for a few years before she moved and went to a different school.  But for that time, she was my best friend.  My only best friend.  I chose her and she chose me.  Sure there was always another friend to play with, but given the option, it was always her.

In some of the relationship we have – friends, lovers, boyfriends, girlfriends, maybe even husbands and wives, we always have a choice to make.  When we choose someone to have in our lives, or they choose us, then we have a responsibility to one another, and I mean that in a good way.  We should want to, and so should they.  That’s what being friends, life partners, what have you, is all about.  But because of that choice, the reality is that there’s always, always going to be someone in the next shopping center (metaphorically speaking, don’t actually stand around in a strip mall looking for someone at random) if the one you’re with at the moment isn’t to your liking, or isn’t treating you well.  We don’t have arranged marriages in this country, and arranged friendships usually stop at about kindergarten, maybe first grade.  And so it’s pretty true.  And Jimmy is clearly gifted at seeing the profound within the mundane, because he’s right.  There is always another Mexican food restaurant.

But shouldn’t you have a favorite one?  I do (it's not El Fenix).  And hey, maybe you have two or three favorites, which works if the metaphor in question refers to friendships.  With significant others, or spouses, the reference gets a little murky, and I’m definitely not an advocate of polygamy.  That being said, if we’re talking restaurants, then pick and choose, try something new, visit your favorite one often.  If one day, the tacos are lousy, maybe you give them a second chance.  If the tacos stay lousy and then the enchiladas start to suck too, then maybe not.  Actually, that point translates.  Taco equals boyfriend, best friend, etc.  And now that we’re talking friends or loved ones, if you’ve got someone you care about, or a few someones, people that are generally awesome to you and treat you like you’re special, people you like to be around, then make the time for them.  Love them back, tell them you love them, cherish them.  Because they have the same choices that you do.  And there’s always another Mexican food restaurant for them too.

And thanks Jimmy.  My friend, if I don’t tell you enough, let me make the point now to say you are, categorically, one of my favorites.
Posted by Karen Soltero at 9:52 AM