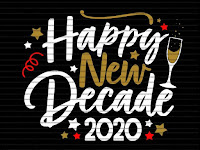 The end of the decade brought with it what I like to call the year of celebration.  And I’m not gonna lie, I feel like I’ve earned it.  Engagement, wedding, honeymoon to end all honeymoons.  A Christmas filled with both his family and mine.  A blowout New Year’s Eve spent dancing in the glow of a giant Christmas tree, surrounded by beautiful, beloved friends.  And this year, on New Year’s Day, I spent it with my husband and our three dogs, doing nothing, but doing it together, as fulfilled as one human can possibly be.  And this new decade is full of nothing but promise.
Posted by Karen Soltero at 8:47 PM